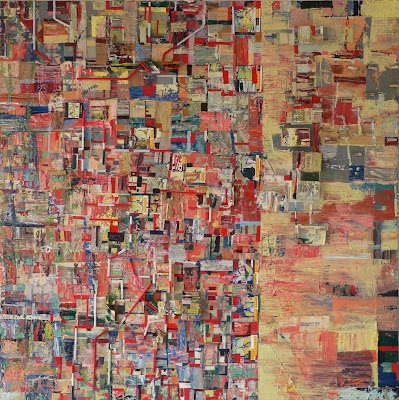 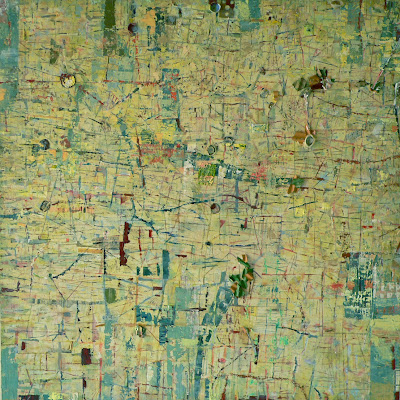 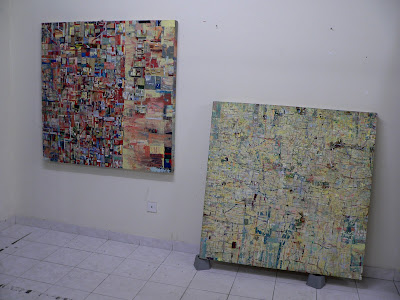 " Choy Chun Wei is interested in the constructs of structures that impart the nature of its inhabitants. In Living Mementos Series, the process of creation is integral to the meaning of the work. Chun Wei borrows texts, such as instruction manuals and signboards that are used to facilitate manoeuvres within a manmade environment. He then exposes the fragility of our dependence on these by alternately concealing with paint and then cuttingly exposing them with a pallette knife. The resulting effect is one of fragmented narration and shattered surfaces, jaringly questioning our acceptence of systems and definitions." (Li-En Chong, 18@8, Kuala Lumpur - Karachi, December 2006)

Bottom:
Works in studio.
Posted by choy chun wei at 7:05 AM No comments:

Choy Chun Wei is enjoying his time playing the “collector” and the “ engineer” in Rimbun Dahan. Look around and you will find his workspace populated by jars and tubes of paint in different degrees of exhaustion, while piles of unidentifiable junk and a plethora of paraphernalia lay scattered on the floor. When I visited his studio recently, he tells me “I still return to the city to collect all this junk”. The process of collecting and constructing, or building, forms the root of Chun Wei’s artistic approach. Whether in the form of photographs, paint, ink,or other found materials, the bpotential in each of the artist’s materials will be stretched out, deconstructed, reconstructed and layered to present unique views of life within an urbanscape.Those familiar with Chun Wei’s body of work will recall his early photo-collage series such as Citadel and Link House series from 2001. They were the result of morning ritual whereby the artist would walk with his camera to work, photographing random exteriors of homes in Bandar Utama to avoid the monotony of this routine. The collection of photographs captured from these walks later grew into a series of musings about home within our fragmented urban environment seen through the eyes of an outsider. In his latest series, Construction Site, paint and found materials have replaced photographs to become the building blocks in the artist’s work. He tells me that every single paint mark and object is treated as individual units, “like Lego blocks”, built layer upon layer, one over the other. Each work begins with the overlaying of paint onto the surface ground in broad sweeps. “I rarely know what is going to happen during the early stages so I just let it happen” Once these initial sweeps have established, ‘units’ of paint and materials are incorporated into and over the initial foundation through the use of a diverse range of tools--hands included-- as well as other media to create a spectrum of marks and textures. It is clear, through this new body of work, that the artist has discovered a more instinctive and energetic process in creating image and texture; there is an obvious sense of play, as well as a new found confidence in distilling the images to near abstraction.

Urban landscape and mapping continue to figure prominently in Chun Wei’s work The ritual of returning to the city to collect the artist’s “junk” bear poetic resonance in the artist’s dedication to his subject matter. While his mapping process may have begun within the immediate confines of Bandar Utama, his concerns have since extended into farther reaches, taking on a wider worldview beyond geography and tangible matter. Perhaps this development is prompted by changes in the artist’s personal life. Marriage and moving out to a new home has shifted his outlook on life; he is no longer the wandering outsider looking in, but rather someone who has found hearth and home.

“Construction Site” begins with “The Construction of a Metaphysical Site I”. While the spatial arrangement may appear conventional to the eye, it is nonetheless striking in its composition and form. It recalls the imaginary maps many of us would have drawn during childhood. Colours and simple geometric shapes are employed to demarcate
Different territories and densities while incidental marks may suggest roads, railway tracks or borders. “The Construction of Metaphysical Site II” suggests a fantastical yet apocalyptical cityscape alluding to Italo Calvino’s “Invisible Cities”. Vertical forms, monoliths, grow from the opposite directions; they weave in and out of the dramatic
foliage, moving towards each other, drawing closer to convergence.

Subsequent works such as “The Changing Mindscape”, “Intimate Dwelling Site” and “Configuration I”, demonstrates to the viewers that spatial configuration in each painting has grown progressively tighter and denser through the course of development. The drama and density of this series culminates in the epic “Big Dwelling Site”, Impressive and intense, its expanse and tight overlapping layers of paint and found materials overwhelms the senses. The eye picks up on the random details and unexpected textures as it roves through this dense forest of marks and colous; you will bits of corrugated board here, unidentifiable slices of plastic and dried materials there, a shaved off bar code somewhere above. The painting possesses a cubistic resonance as the artist breaks up the picture plane to create multiple perspectives. They also remind us of Mondrian’s earlier paintings employing grid and lines as his primary motives. Spaces move in and out , shifting from two-dimensional to three-dimensional planes, taking our eye on a manic ride through tightly wound crooks and crannies, before launching into exhausting claustrophobic areas, which slowly eases off towards the edges.

“Configuration 3(Breathing Space)”, one of the later pieces in this series, sees the artist side-stepping from his usual media employed in “Construction Site”. It is perhaps the most carefree piece in the series, and as the title suggests, this painting provides a beguiling reprieve from the intense concentration of heavy impasto marks and texture. Here, the brush takes over the palette knife to create a delicate yet intricate web of lines. They float evocatively in space, layered in muted neutral shades, amidst collaged drawings of furniture culled from the pages of an IKEA catalogue. The minimal treatment draws attention to the construction of the image, allowing the visual narrative and emotional content to exclude its understated charm.
Posted by choy chun wei at 1:50 AM No comments: 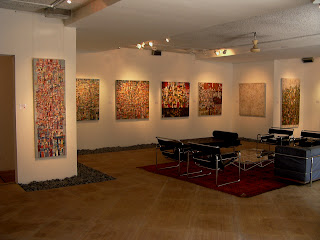 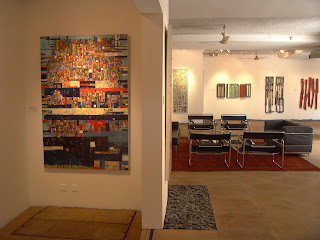 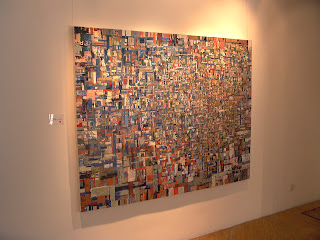 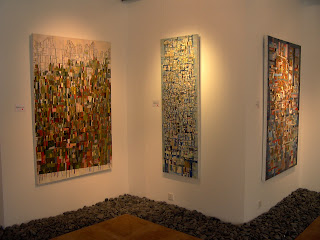 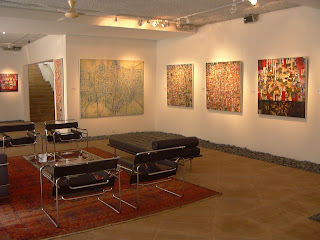 VIEWS OF GALLERY SPACE AT THE
RIMBUN DAHAN RESIDENCY SHOW 2006
Posted by choy chun wei at 5:41 AM No comments: 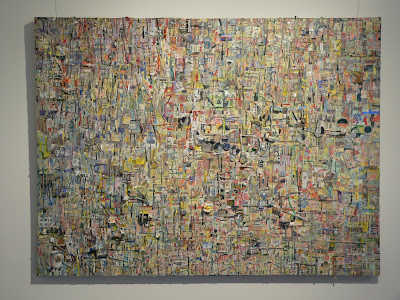 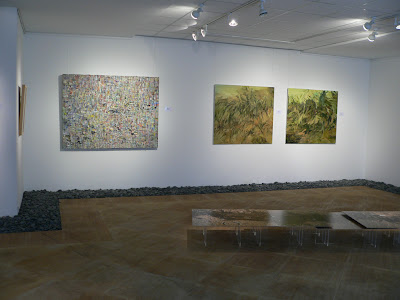 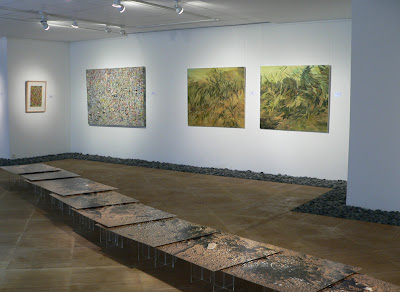 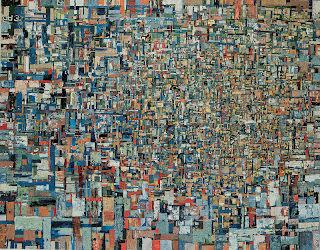 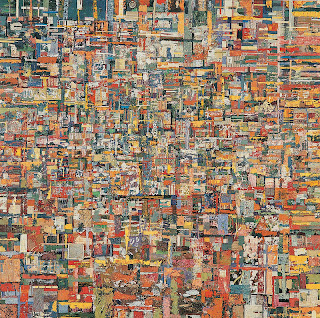 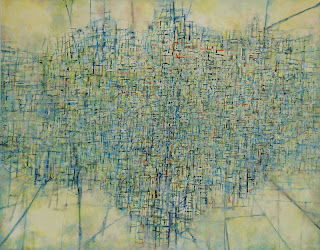 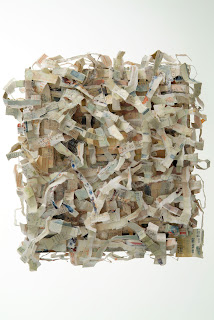 choy chun wei
I am just a vessel. No more, no less. Serve with my purest intend for my God almighty.